As a lover of stories and fiction, I was attracted to yoga as much by its rich tapestry of legends and metaphorical figures as by the physical experience of attending classes. Although my body loved it from the very first class (sometime in the 80’s…yikes!) I was even more intrigued when I was introduced to the yoga sutras for the very first time. 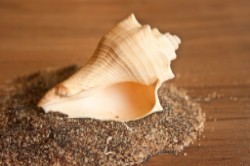 The yoga sutras are a collection of wisdom teachings that were compiled around 200CE. They are attributed to an author named Patanjali, although no one knows for certain who this historical person was. Modern scholars believe that it may have been several people, or several generations of a family with the surname Patanjali. Or, he or she may have been given the name Patanjali posthumously.

Although we will probably never know the true author, there is a lovely story about him. A very saintly woman named Gonika, who was childless, prayed beside a beautiful fountain every day for someone to pass all her wisdom to. One day, in prayer, she offered up a handful of water to the Sun God. A tiny snake fell into the water and then transformed into a human. She named him Pata (which means “fallen”) anjali (hands folded in prayer) because he was literally the answer to her prayers.

Patanjali is depicted in statues as half man and half serpent (the three and a half coils of his lower body represent the three gunas or properties of nature, and the last half is for the transcendent state that is beyond the influence of nature).  He has four arms, and also sports a hoodie made up of a thousand-headed cobra, which was meant to represent the harnessing of consciousness and the sovereignty of the illuminated mind. (The cobra holds a much different meaning in eastern philosophy than it does in our western stories and literature).

In one of his hands Patanjali usually holds a conch, the large beautiful shell that is sometimes used like a trumpet. When you hold a conch to your ear you hear the ocean (i.e. the sound of your own circulation, your own heart beating). When Freud described the sense of interconnectedness, he used the term “that oceanic feeling.” The shell is often interpreted as a symbol of going inward, of seeking the wisdom within. The echo of the ocean within the shell reflects the idea that all that is outside us is also within us. One expression of the yogic world view is that we are all just pieces of the great universal soul making our way back to wholeness.

Regardless of its mysterious origin, The Yoga Sutra of Patanjali is the foundational text of classical yoga. It’s a fascinating, sometimes contradictory, exploration of the psychology and aims of yoga that is important to understand or at least be aware of. We’ll be diving into this text as part of the meditation and study group that starts on May 5th. I hope that some of you will be able to come and take part,

Trussssst me on this one lol,

Elaine
PS instruction in meditation will be offered, so no worries if you are not a meditator yet.